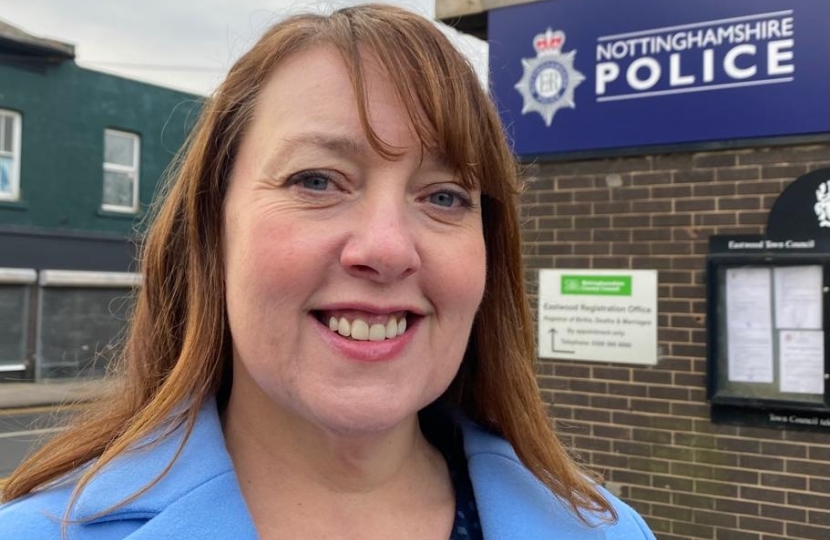 Conservatives across Nottinghamshire have backed the bid for Caroline Henry to run in the election for Police and Crime Commissioner in the May elections this year.

Caroline, a career-business woman, born and brought up in Notts, decided to run as a candidate after three of her closest friends were burgled. She will challenge Paddy Tipping who has been Commissioner since 2012.

“People in the city and the county need to see change. My three closest friends from Nuthall, Sherwood & Southwell have all been broken into. My dad lives in fear of being scammed online. And I don't even leave my dog tied up outside when I pop into the Post Office because I am worried about the rise of dog thefts,” said Caroline.

“Being born and bred here in Notts, it really matters to me that our community here are not victims of crime. We need to get tough on crime and make people feel safe where they live and work. Seven of the top ten best performing police forces are run by Conservatives, it is Nottinghamshire’s turn to become one of those best performing places.” she added.

“Our brave police officers and support staff do a fantastic job and the Government is hiring 20,000 more police with the first 6,000 in place and have provided £70 million for Violence Reduction Units so that Commissioners can lead the fight against violent crime and take weapons off our streets.”

Other Government initiatives underway across the country are:

·        an extra £7 million to Police and Crime Commissioners to combat domestic abuse. This funding will introduce a range of innovative programmes from early intervention through to intensive targeted programmes for high-harm and high-risk offenders. We will address the root of the problem by preventing offending.
·        Building on the £92 million made available since the start of the pandemic to ensure victims of crime can still access the support they rely on.
·        This includes £10 million for domestic abuse safe accommodation charities services; £26.4 million to support vulnerable children, £22 million to help victims of domestic abuse and sexual violence, a further £3 million per annum investment in Independent Sexual Violence Advisers until 2022; £3.8 million for community-based domestic abuse services and modern slavery services, and £7.8 million for charities helping vulnerable children who have been impacted by the coronavirus outbreak.

Caroline who is married to Darren Henry, Member of Parliament for Broxtowe, added: “People deserve better and we have come up with clear plans to make Notts safer.

“My pledge is to work tirelessly to tackle the problems which concern ordinary people across the county, to put the resources where they’re going to achieve real results, and to make the role of Police and Crime Commissioner count for the community”